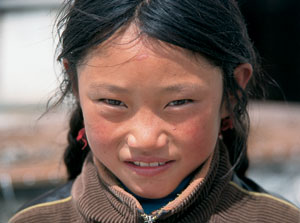 Girl in Lhasa, central TibetTears came into my eyes when, beyond the fluttering prayer flags at the top of a 5,280- metre-high mountain pass, I first laid eyes on sacred Mount Kailash, one of the world’s most remote and legendary destinations, in the far west of Tibet. I had wanted to go to the mystical Himalayan kingdom for decades, but time had passed and after a serious health scare four years previously I had questioned the wisdom of doing so, given its high altitude, isolated location and unsanitary conditions. Eventually, to celebrate my birthday, as well as to prove to myself that I could still do it, I had decided to take the plunge and go on a three day kora (circumambulation) around the mountain after attending Saga Dawa, Tibet’s most important religious festival. 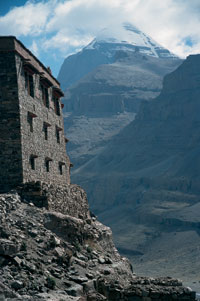 Chuku Monastery looking up to the west
face of Mount Kailash, western TibetMy journey had begun 1,200 kilometres to the east in Lhasa, which, at an altitude of 3,650 metres, is the world’s highest capital. My doubts about the journey had quickly proved to be well founded. I had decided to be sensible and spend five days acclimatising in Lhasa, but I hadn’t expected to have such headaches and sleepless nights. Then there had been the arduous journey westwards. For days I’d sat choked in dust as my hired fourwheel drive juddered across the forlorn 4,500-metre-high plateau. As the flat-roofed, white Tibetan villages gave way to increasingly desolate mud settlements more in keeping with those in Afghanistan, the guesthouses had become increasingly primitive, with revolting toilets and not much to eat except rice and noodles. Before long, like many travellers, I had a raging cold, and had to take antibiotics for such bad diarrhoea that I had begun to wonder whether I would even reach the holy mountain.

To my surprise, I had also been rather disappointed with Tibet. Of course, I had loved the magnificent monasteries, especially Shigatse, Gyantse and Sakya, as well as the vast, treeless, sun-dappled valleys dotted with white or brown yurts and shaggy black yaks. But my guide, Tikki, a squat, 26-year-old woman, and my driver, Chumpin, a would-be cool, chain-smoking young slicker from Lhasa, had been a tremendous letdown. Both had been totally uninterested in Tibetan Buddhism or taking me to meet nomads, unlike Tseveenjav and Tunga, the driver and guide, who had made my Mongolian journey so memorable four years previously. Nor had Tibets impressive-sounding 5,000-metre-high passes lived up to expectations, as they had merely given way to yet more ranges of arid, crumpled hills, instead of the tantalizing Himalayas that I had expected, and which could be occasionally glimpsed to the south. . . 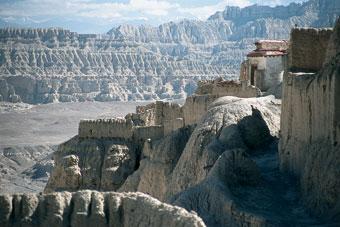 View from the ruined Royal Palace, Guge , towards the Himalayas 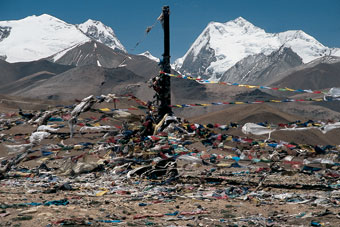